Warning: "continue" targeting switch is equivalent to "break". Did you mean to use "continue 2"? in /nfs/c06/h01/mnt/88637/domains/blog.irockcleveland.com/html/wp-includes/pomo/plural-forms.php on line 210
 I Rock Cleveland I Rock Cleveland | The Rockometer: 77 by Nude Beach

The Rockometer: 77 by Nude Beach 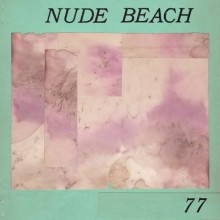 While the album title, 77, may suggest the golden era of punk rock, Nude Beach’s behemoth, 18 song, 70+ minute effort actually pays homage to a different Rock ‘N’ Roll tradition — That of the American bar rock band. That old practice of men working for the weekend and then ringing it in with beers and blasting guitars may wax and wane, but never completely goes out of style. Depending on your vantage point, the trio of Chuck Betz, Ryan Naideau, and Jim Shelton may remind you of Tom Petty in the ’70s, The Replacements in the ’80s, Wilco’s early output in the ’90s, or contemporary rabble-rousers like The Men.

If you’re not just here to click on things, but to read things, too, your immediate question should be, does Nude Beach have the chops to hold a listener’s interest for 70 minutes? Sure they’ve mastered the three basic bar rock songs — The punky jump start, the bleary-eyed ballad, and the mid-tempo lament. They do the punk rock variant with more raw noise and the Southern rock variant with more twang and more solos. Yet, of all the bands listed at the beginning of the review, there’s only one, Wilco, that can pull off the double album and even with Wilco, not all of their double albums are equal. There’s a fine line between consistency and repeating yourself on an album of such length and Nude Beach are standing on that line, or rather they hop back and forth over the line, daring you to find enough fat to trim. I’ve spent the afternoon with this record, literally the entire afternoon on three plays front to back, and I keep going back and forth on the question myself.

And if we’re talking about Friday night barroom blasters, the second side delivers with a quick one-two-three of the ramshackle rave-up, “For a While,” the smoothed up and glammed up, “For You,” and the punked up, and still positively Petty-like “I Can’t Keep the Tears from Falling.” It’s four in the afternoon on a Thursday as I write this, and I’m ready to drink away the day job.

Now do you understand my conflict? Taken individually, there isn’t a single track on 77 that jumps out of the box as a hit made for another age and there isn’t a single track that’s an obvious B-side masquerading as an album track. On the C-side, “Changes,” melds the easy going nature of West Coast psychedelic pop with southern-fried guitar heroics to compelling effect. Flip the second LP over and the boys choogle with ever more confidence and even more freedom on “I Found You.” 77’s unwieldy size is its one and only drawback.

Even on a Friday night at the rock club with beer in my belly and nothing but beer occupying my mind, 70 minutes of Nude Beach would begin to tax my patience. At 45 minutes my faith in Rock ‘N’ Roll would be reaffirmed. After 70 minutes (and that 10 minute jam monster, “I Found You,” lurking on the D-side), my mind starts to wander to other things, like maybe I should call a cab ride home. Maybe I should ask that woman at the end of the bar if she would like a ride home, too? Nah, I’d probably get slapped. I’d rather sleep without the slap. Call the cab and call it a night.