Warning: "continue" targeting switch is equivalent to "break". Did you mean to use "continue 2"? in /nfs/c06/h01/mnt/88637/domains/blog.irockcleveland.com/html/wp-includes/pomo/plural-forms.php on line 210
 I Rock Cleveland I Rock Cleveland | The Rockometer: Slow Release by Yes I’m Leaving 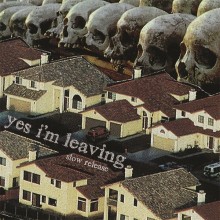 Slow Release, the latest long player by the Sydney band, Yes I’m Leaving, is a record you can judge by its cover, its back cover to be more precise. Let’s read over these song titles. Side one starts with “One,” and leads to “Puncher,” “Fear,” “Alchemy,” “Timer” and “Salt.” Side two reads “Care Less,” ” Manic,” “Funny,” “Secret,” and “Husk.” Those of you who were into the scuzzier, nastier sounds of the ’90s underground are already saying to yourself, “Hey those sound like Jesus Lizard songs, or something from the AmRep catalog.” You would be right.

Any more when a reviewer throws out a signifier like AmRep, as I’m doing here, it’s shorthand for those modern bands like Metz and Pissed Jeans on Sub Pop, and Yes I’m Leaving on Australia’s Homeless Records, who deal in frustration rock. Life sucks and the only way to cope is to bash instruments like Hulk. And indeed, Yes I’m Leaving do bash.

Words break through the mouth of vocalist/guitarist Billy Burke like a madman on the lam. They come out in gruff bursts, only sometimes in fully-formed sentences, more concerned with the moment than the larger picture. “One” is man in survival mode, both fidgety and unhinged, moved to short fits of action and punctuated by adrenaline-fueled guitar gruel and manic yelps. David Yow would be proud.

The rhythm section, meanwhile, operates with the subtlety of a cement mixer, perfectly mimicking the mental anguish of a head moving to fast to think on tracks like, “Fear.”

Yet, if there’s one track that aptly sums up Yes I’m Leavng’s ouevre, and the larger frustration rock movement, it would be the B-side’s lead, “Care Less,” two words, as in, “I just don’t care any more/I don’t know if I ever did.”

Those AmRep bands back in the day, both those in label and in heart, never cracked the mainstream and had their movement broadcast like the Seattle sound. Once Nirvana hit, radio found a kinder, gentler mess to sell. Consequently, names like Jesus Lizard (on Touch and Go Records), Tar, Hammerhead, and Surgery have become secret handshakes, shorthand for getting it and not giving a fuck. Yes I’m Leaving get it. Yes I’m Leaving don’t give a fuck. Got it? Now, get the record.