Warning: "continue" targeting switch is equivalent to "break". Did you mean to use "continue 2"? in /nfs/c06/h01/mnt/88637/domains/blog.irockcleveland.com/html/wp-includes/pomo/plural-forms.php on line 210
 I Rock Cleveland I Rock Cleveland | The Rockometer: Poor People Are Revolting by The Gotobeds 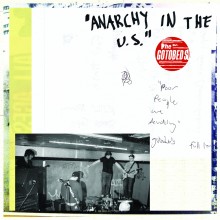 What’s not to like about these Pittsburgh smart-asses, the Gotobeds? Poor People Are Revolting, the band’s debut long player for Gerald Cosloy’s 12XU, is two sides of punk rock slop packed with clever vocal jabs and insatiable melodies.

C’mon, has there been a better opening line put to vinyl in 2014 than “New York’s allright if you can get your dick sucked?” Maybe a New Yorker would take umbrage to the passive aggressiveness of “New York’s Allright (If You Like Sex and Phones),” but for someone from Pittsburgh, or say a city like Cleveland, it’s a clear signifier that this band could be your new soulmate, a soulmate who smells like stiff sweat socks and stale beer, and a soulmate who’d eat your only bag of chips before you got home from the bar, but a bestie, nonetheless.

The Gotobeds deploy a similar guile when it comes to the American punk rock canon. For like the best of ’em, the band realizes there’s a time for fucking around and windmilling your guitar with no regard to your mate standing to your right, and a time to focus for the band’s sake. The real trick is to make it sound like you don’t give a fuck when in fact everyone is on the same page. “Fast Trash,” with its flat tire at 55 rhythm and caterwauling guitars is a master class example of how this game is to be played.

Later, on “To and Fromme” and “Fucking Machine,” you’ll hear echoes of ’90s slacker masters, Pavement, and on, “Wimpy Garcia (Brotherfucker)” the influence of the original punk trash band, The New York Dolls, emerges.

After two sides of Poor People Are Revolting, you’ll be ready to add the Gotobeds to that list of rocks greatest impostors — those bands whose willful abandon is both a facade masking their smarts and an essential part of their recorded success.