Warning: "continue" targeting switch is equivalent to "break". Did you mean to use "continue 2"? in /nfs/c06/h01/mnt/88637/domains/blog.irockcleveland.com/html/wp-includes/pomo/plural-forms.php on line 210
 I Rock Cleveland I Rock Cleveland | The Rockometer: S/T by Viet Cong

The Rockometer: S/T by Viet Cong 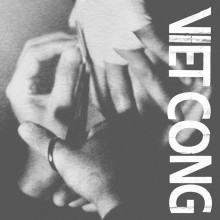 It’s not that the Canadian post-punk outfit, Viet Cong, have listened to different albums than you and I and everyone else active in the underground music scene. The foreboding tones of Ian Curtis and Joy Division provide a convenient starting point for anyone with a passing interest in what’s happened outside of the mainstream during the past 30 years. Yet, unlike pretty much everyone else who has turned to the early days of UK post-punk for inspiration, the finished product is anything but a by the note reproduction of once ground-breaking sounds.

The tense, monochromatic vocals of bassist Matt Flegel do bare more than a passing resemblance to Interpol’s Paul Banks. And, that’s where those Interpol comparisons should end. For Flegel, along with drummer Mike Wallace, his ex-bandmate in the beloved, art-rock band, Women, and guitarists Scott Munro and Daniel Christiansen show more ingenuity on the first ten minutes of their debut record for Jagjaguwar than Interpol have shown in a lifetime of attempts at a follow-up to their breakthrough debut.

Witness the uncommon pairing of Wallace’s oddly, accented beats and Flegel’s reggae, by way of Fugazi and Joe Lally, bass rhythm on “Pointless Experience,” and how Flegel’s vocals provide the only steady ground as the guitars abruptly shift forwards and backwards, from one channel to the next, like some fool who can’t stop fucking with the car stereo. Or, “March of Progress,” whose reliance on triplet notes, first in the form of overblown beats, and then from the guitars, which dangle and snap like overgrown icicles, produces an unsettling polyrhytmic effect.

Consequently, when Viet Cong allow all of those elements to align in a more accessible manner, the pop songs truly pop.

“Silhouettes,” in particular, arranges those haphazard beats and sharp guitars into a centerpiece worthy of their uncommon ambition.

Nothing, however, can properly prepare the listener for “Death,” the eleven-minute monster lurking at the album’s end. It’s an exercise in tension and release, tone and texture, dissonance and cacophony; A tour of 21st Century trends with a propulsive, motorik rhythm and an impenetrable wall of sound; And, a lesson in aggression as guitar strings are stretched to their breaking point with the same chord pounded in increasing anger. “Death” is a tour de-fucking force one has to hear to believe. Viet Cong are a tour de-fucking force, with “Death” just the beginning.