Warning: "continue" targeting switch is equivalent to "break". Did you mean to use "continue 2"? in /nfs/c06/h01/mnt/88637/domains/blog.irockcleveland.com/html/wp-includes/pomo/plural-forms.php on line 210
 I Rock Cleveland I Rock Cleveland | The Rockometer: No Cities to Love by Sleater-Kinney

The Rockometer: No Cities to Love by Sleater-Kinney 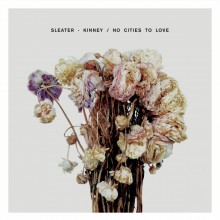 Liberal thinkers and commentators have a reputation, often much deserved, of not being able to take a joke, of being not fun. It only takes ten minutes on twitter and having your feed hi-jacked by another witch hunt to confirm your worst instincts on liberals. So, it should come as no surprise, when an indie-rock trio loved by liberal thinkers comes out with their first new album in ten years, the fun factor is sadly overlooked.

Sleater-Kinney are an important band, a very important band. Their left-leaning politics and fiercely proud feminism sheltered countless listeners during the band’s first run through the ’90s and early-to-mid ’00s. Carrie Brownstein also has one helluva rock kick. And you know that song of theirs, “No Rock ‘N’ Roll Fun?” Turn it around and the message becomes, Sleater-Kinney are Rock ‘N’ Roll fun.

Therein lies the brilliance of Brownstein (guitars and Portlandia), Janet Weiss (drums), and Corrin Tucker (vocals/guitars) as Sleater-Kinney: With Weiss’ dynamic pummel, Brownstein and Tucker augmenting their sly, side-winding melodies with unabashed arena rock adulation, and Tucker’s soul-infused yowl, the serious becomes less stuffy and the life-changing becomes life. And fun. We were going to talk about fun, weren’t we?

Similarly, lead single, “Bury Our Friends,” raises resilience to kegger levels. Lefties can have keggers, too, right? A kegger with well-organized beer lines, supervised bicycle parking, and a tip bucket for the local woman’s shelter is still a kegger.