Warning: "continue" targeting switch is equivalent to "break". Did you mean to use "continue 2"? in /nfs/c06/h01/mnt/88637/domains/blog.irockcleveland.com/html/wp-includes/pomo/plural-forms.php on line 210
 I Rock Cleveland I Rock Cleveland | The Rockometer: Boogalou Reed by Obnox 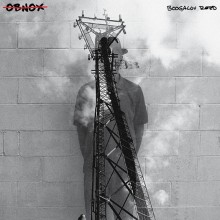 The whole damn country is about to burn down, and I’ve been trying to get you on to this shit for twenty years. They’re talking about the police, I’m talking about, “We need to get together and try to understand one another.” So here’s the soundtrack for your life. White cats can get into it. Hip-hop niggas can get into it. Punks can get into it. Indie rock dude, he’s already in. Noiseheads. It’s all in there: stand up, stand tall, hold your head up. Self-worth, at a time where people will tell you, “You ain’t shit.” Lamont “Bim” Thomas speaking to Joe Yanick for Noisey

It’s not just the whole damn country that’s about to blow up, with his third long player in less than three years, Lamont “Bim” Thomas is due to blow up, too. For more than any other Obnox record, Boogalou Reed, showcases Thomas’ unique ability to blur the lines between punk rock, hip-hop, and experimental sounds. There are no beat-based joints, or punk rock ragers, or improv head fucks. Instead, there are Obnox songs, fifteen of them, to be precise, and each one gives the listener a slightly different perspective into the mind of Thomas, on this, the outlaw rockers’ most poignant work to date.

The bass beat of “Slaughter Culture,” sounds like “Baby’s Got Back” blasting the lift gate off of the hinges of a beater hatchback. During the verses, the guitars, track upon track of them, are lifted up into the red. Then, that chorus, hits, “Johnny Cash/outlaw/Jimi Hendrix/outlaw,” and it’s like an old-time, barroom stomper.

And, yes, if we’re talking punks and outlaws, Tupac was both. It just so happens that Thomas uses this occasion to drop a humorous, how drunk was I yarn, in the traditional garage rock party style.

A similar misdirection occurs on the title track, “Boogalou Reed.” Instead of some dirty streets of downtown, soul-punk flavor, Thomas and his co-conspirators track more of those blasted and blunted beats along side some Star Trek era sci-fi sound effects. Thomas’ vocal delivery, meanwhile straddles the line between R&B and hip-hop.

But to truly understand where Obnox is coming from, one has to understand the past. Dude’s been playing this white dude’s game for some twenty years, and each release of his tends to have a nod to either his roots in the Columbus, then Cleveland punk scene, or his home state of Ohio, in general. He covered the Ohio State theme song, “Hang on Sloopy” on Canabible Ohio, and included a shout out to Columbus, Ohio’s Cheater Slicks on Corrupt Free Enterprise, with a cover of “Ghost.”

This time around, Thomas has chosen “Ohio,” the Crosby, Stills, Nash and Young protest anthem about the 1970 National Guard shootings at the Kent State campus, and shit, is it heavy. With the help of designated shredder, Chuck Csieslik of Puffy Areolas, Obnox transforms the classic rock standard into a death march, replete with a down-tuned doom metal riff.

This is what war sounds like — mechanical rumble and piercing sirens. This is what struggle sounds like when hope is far away. This is the bleakness lining up against the state’s armored humvee when your only weapon is your mind. And if you think I’m exaggerating, the spoken word break where only “The struggle continues/Nothing’s changed,” is audible through the screech, draws a direct line from the Vietnam protests of the ’70s to Ferguson and Michael Brown, Eric Garner, and Tamir Rice.

In the same Noisey interview, Thomas seems to embrace the role of rabble rousing protest singer, explaining how he’s got the words and music, while others in his inner circle concentrate on community action, “My brothers are out there on the front line. I’ve got brothers that are educating the youth, teaching at charter schools, and they’re dealing with that lane. I’m dealing with the rock and roll underground and any like minds.”

Nowhere is sentiment more clear, than the uplifting (and righteously ragged), “I Climbed a Mountain,” a spiritual for a new age where self-reliance is the light. With a chorus of, “I’m not dead/I can’t stop now/Ya want me dead/I want back down/I’m for real/I’ not a clown/Rebel music comin’ round,” this one is rally-ready.

Lord knows, living in Cleveland, the CPD has given us plenty of reasons to rally. Now it’s time for you, the rocker, hip-hop head, and punk to get your ass to the record store and get yourself educated. Whether we’re talking Rock ‘N’ Roll or real life shit, movements don’t move themselves.