Warning: "continue" targeting switch is equivalent to "break". Did you mean to use "continue 2"? in /nfs/c06/h01/mnt/88637/domains/blog.irockcleveland.com/html/wp-includes/pomo/plural-forms.php on line 210
 I Rock Cleveland I Rock Cleveland | The Rockometer: A Distant Fist Unclenching by Krill 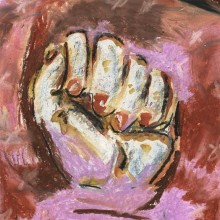 Like their brothers in rock, Pile, the Massachusetts act Krill are one of those bands who wouldn’t know a chorus if the chorus was a wet Atlantic salmon and they were smacked over the head with a wet Atlantic salmon chorus. They’re also one of those bands who tend to nerd out, and noodle on their instruments for minutes on end like early Modest Mouse and early Built to Spill. Oh, and bassist/vocalist, Jonah Furman has a unique way with words. The most memorable track on the trio’s 2014 release, Steve Hears Pile in Malden and Bursts Into Tears, was called “Turd.” Furman literally imagined himself as a turd, as in a piece of shit, going down the commode. This is all to say Krill are not going to be everyone’s favorite new band, not everyone is going to get it. Those not content with the status quo in modern guitar rock music, however, should by all means get themselves more familiar with the weird world of Krill.

At a shade under three minutes, “Foot” provides a natural gateway for the uninitiated.

What it lacks in terms sing along lines, it more than makes up for with its craftsman-like quality and visceral thrills. Notice how each instrument, guitar, bass, and drum gets equal billing in the mix, and how the guitar notes, in particular, are allowed to dangle and trail off into emptiness. Now, when they turn on the blasters, each irregularly spaced shock becomes all the more jarring.

“Torturer,” provides similar thrills as it toys with time signatures and pace, using a rhythm nearly impossible to tap out. And yet, it has a couple big rock moments of its own when forceful down beats lead the band through standard 4:4 measures, Furman’s voice raises in agitation, and each syllable is punctuated with a forceful strike of guitar.

“Tiger,” with its jazzy rhythm and lazy, swaying psychedelic tones spread over seven minutes, and its only real payoff moment coming six minutes in, is much more difficult to parse. Let’s call it graduate level Krill. If you find yourself digging this, then you can quit buying new records. You’ve got your album of the year in February.