Warning: "continue" targeting switch is equivalent to "break". Did you mean to use "continue 2"? in /nfs/c06/h01/mnt/88637/domains/blog.irockcleveland.com/html/wp-includes/pomo/plural-forms.php on line 210
 I Rock Cleveland I Rock Cleveland | The Rockometer: You’re Better Than This by Pile

The Rockometer: You’re Better Than This by Pile 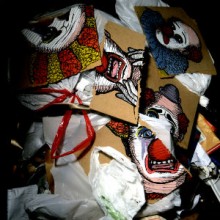 Pile
You’re Better Than This
Exploding in Sound

I can’t say that I’d go as far as to say You’re Better Than This, the new record by buzzy, Boston upstarts, Pile, is a difficult album, as Pitchfork’s Paul Thompson claims in an otherwise complimentary review. Selections, like howling opener, “The World Is Your Motel,” should sound familiar to anyone whose knowledge with the AmRep catalog stretches beyond knowing how to use AmRep as a noun as a shortcut for the nastier and heavier underground sounds of the ’90s.

And, anyone who’s ever looked elbows with his neighbor to rumble and stumble their way through a packed all-ages crowd, should know what to do when the first gnashing bits of guitar from “#2 Hit Single,” reach your ears. You head for the back of the crowd ‘cuz you’ve got a five-dollar beer in your hand and you’re too old for this macho man shit any more.

Like their fellow Massachusetts scenesters in Krill, Pile, largely eschew traditional rock structure and have all but abandoned the chorus. Yet, instead of noodling for noodlings sake, Pile use their freedom from convention in a much more powerful way: to create a musical narrative as unsettling as it is unpredictable.

If You’re Better Than This was a psychological disorder, it would be manic depressive. If it was self-medicating, it would be meth, and a barbiturate or two, and more meth.

The life of Pile is an intense life and its greatest strength is the way it lets all the nasty out without any filter. One minute, you sway to a drunken ballad, like, “Hot Breath,” resolved to defeat, and the next minute, you know, shit’s not that bad if there were more power chords and a hole in the wall roughly the size of your right fist. If it’s the same song, and we were still talking about “Hot Breath,” but the latter half, that’s ok. If the next track needs to feed your next DIY home project, that’s cool, too. Life doesn’t have a tracklist and it doesn’t organize itself in verse chorus verse.