Warning: "continue" targeting switch is equivalent to "break". Did you mean to use "continue 2"? in /nfs/c06/h01/mnt/88637/domains/blog.irockcleveland.com/html/wp-includes/pomo/plural-forms.php on line 210
 I Rock Cleveland I Rock Cleveland | The Rockometer: Sometimes I Sit and Think, Sometimes I Just Sit by Courtney Barnett 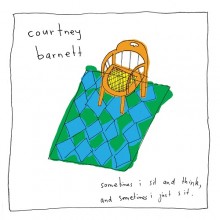 Much like the beloved American sitcom, Seinfeld, a show about nothing, Courtney Barnett’s debut album, Sometimes I Sit and Think, Sometimes I Just Sit, managers to be highly entertaining while working with the most banal source material. Man plays hooky from work. Couple goes house hunting. Courtney swims. Courtney buys groceries. These are but a sampling of the seemingly ordinary scenes recreated over the course of eleven songs. There’s even a track, “Small Poppies,” where Barnett thinks about moving the lawn. She doesn’t actually cut the grass, mind you, she merely thinks about it.

Yet, Barnett has such a way with words and phrasing, speaking in a slacked, sing-song manner, speeding up or slowing down to fit the meter (and test her rhythm section), sometimes rhyming her lines, but more often nearly rhyming or using an inside rhyme, that these songs pop with colorful details. Pick a track, any track, and you’ll come across a knockout passage, like this one from “Dead Fox:”

Jen insists we buy organic vegetables
And I must admit I was a little skeptical at first,
A little pesticide can’t hurt
Never having too much money I buy the cheap stuff at the supermarket
But they’re all pumped up with shit
A friend told me they stick nicotine in the apples

On lead single, “Pedestrian at Best,” Barnett works through dating and relationships with a spree of word play, flip-flopping between being insecure without a man to chewing up and spitting out any man who mistakes her for another pretty face.

“Pedestrian at Best,” also serves as a reminder that as much attention Barnett gets for her words (someone prone to exaggeration on a respected site is already calling her the Dylan of the millenials), she’s not solely a wordsmith, but a musician, too.

The arrangements are tailored to her mood, punchy, but never overstuffed, from amped up alterna-rock with well-placed pedal stomp solos, to moonlit ballads with wavering and whispering guitar lines. Instead of being an album about nothing, Barnett’s unique voice, engaging narratives, and just right melodies assure Sometimes I Sit and Think, Sometimes I Just Sit will be remembered as an important work, one that happened to be inspired by normal, everyday life.