Warning: "continue" targeting switch is equivalent to "break". Did you mean to use "continue 2"? in /nfs/c06/h01/mnt/88637/domains/blog.irockcleveland.com/html/wp-includes/pomo/plural-forms.php on line 210
 I Rock Cleveland I Rock Cleveland | The Rockometer: The Powers That B by Death Grips

The Rockometer: The Powers That B by Death Grips 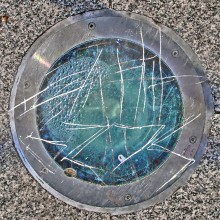 Death Grips
The Powers That B
Harvest/CMG

Death Grips’ double album, The Powers That B, features both the best and worst of these Sacramento noise-rap agitators. On the first album, subtitled, Niggas on the Moon, we get principals MC Ride and Zach Hill indulging their worst impulses. I’ll be damned if there’s a song here, but there’s a lot of busted up beats and slobbering spit takes from MC Ride. Believe it or not, Icelandic national treasure, Bjork is on here, too. Unfortunately, her vocals and pitched, cut up and wrecked to the point where she’s no more than another source of irritation, perhaps the primary irritation. When I listen to tracks like “Fuck Me Out,” I feel like I’m in a casino with all the lights and buzzers buzzing and beeps and ticking until it’s all one uncomfortable din. Oh, and some mad dude is yelling at me, too. The noise! The panic! I want out!

Of course, the reason we put up with Death Grips’ troll shit — they schedule tours and cancel most of them and even when they don’t cancel a tour you may get one Death Grip or no members of Death Grips at all; they’re constantly breaking up and reforming, seemingly incapable or unwilling to maximize their potential, is that these professional assholes are brilliant assholes and, on record at least, they always pay out. They’re the closest thing we’ve got to a 21st Century Rage Against the Machine. Their vitality is unmatched. They explore new possibilities in rock and rap and those places in between like other artists explore social media followers and endorsement opportunities. Put quite simply, there is only one Death Grips. The second half of The Powers That B, a ten-song selection called Jenny Death, is your proof.

Old timers, like me, look back fondly on the Judgment Night Soundtrack, where A-list rockers and A-list rappers and House of Pain, made rock-rap sound like the future. It’s taken 22 years, and a major fucking detour with Limp Bizkit, but throttling pummel of “Centuries of Damn,” fulfills its promise.

“Beyond Alive” takes the punk rock-rap and noise thing where the ’90s could have never imagined. Hill alternates between slamming arena rock beats and driving post-punk rhythms, creating the perfect back drop for MC Ride, bare-chested boasts. Two distinct guitar melodies can be heard: One was birthed in the NYC noise punk tradition, the other one proudly wears its paisley patterns. And while pieces of “Beyond Alive,” can be identified, and its roots can be traced back to other underground tradition, its strength lies in its unyielding sense of self. Maniacal electronic breakdowns only serve to amplify the noise.

Now, this is why I say Death Grips are the closest thing we have to a 21st Century Rage Against the Machine. If these fucks could focus for a couple months, they would have legions at their feet, ready to rip up the system on command.

Imagine it, not some 70 year-old geezer on the big stage, but MC Ride striding out from behind the curtains at Quicken Loans arena for one more song. That song’s gotta be, “On GP.”

It’ll never happen. The Niggas on the Moon half says Death Grips are too selfish, too self-absorbed to give a damn about pleasing people. There’s that history, too, of not being the most trustworthy of acts. Who’s going to be brave enough to bankroll this band? But there’s a chance. It’s why we gamble. It’s why we listen to a record of unlistenable shit. There’s a chance this could all blow up and we’ll look back at Jenny Death as the turning point in Death Grips’ career.