Warning: "continue" targeting switch is equivalent to "break". Did you mean to use "continue 2"? in /nfs/c06/h01/mnt/88637/domains/blog.irockcleveland.com/html/wp-includes/pomo/plural-forms.php on line 210
 I Rock Cleveland I Rock Cleveland | The Rockometer: Neither Virtue Nor Anger by Sonic Jesus

The Rockometer: Neither Virtue Nor Anger by Sonic Jesus 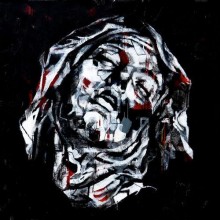 The musical lineage of Italian psych rockers, Sonic Jesus, can be traced back to the ’60s with the Velvet Underground, the ’70s and the German electronic pioneers and the synth punk of Suicide, on to the ’80s and Spacemen 3, and then, into modern times with the Black Angels, The Horrors, and A Place to Bury Strangers. This much should not come as a surprise. The name of the band is Sonic Jesus, a band named Sonic Jesus is not going to play wordy thesaurus pop with all sorts of cutesy strings and things. Sonic Jesus plays psychedelic rock.

Sonic Jesus were born under a blood red moon and everything they touch turns to black. Again, this shouldn’t be a surprise. Take a closer look at that album cover. Do you see good times going on infinity? It looks like torture to me.

This album, Neither Virtue Nor Anger, by this band Sonic Jesus was always going to be a dark affair. It didn’t, however, have to be such a compelling work. It didn’t have to be 90 minutes, either, but first, let’s focus on the good, shall we?

Modern psychedelic rock is not a genre known for its daring. It’s why in the year 2015, writers like me are still trotting out the same touchstones like the Velvets and Spacemen 3. Instead, progress happens on the fringes, in finding novel ways to combine trusted ingredients. Both the seedy, post-punk motorik of “Triumph,” and the sleek, minimalist electronics of “Whore is Death,” contain vintage touches.

Later, the bleak guitar dirge of “My Lunacy” gets a minor makeover of its own in the form of a drone which recalls old spaghetti westerns as much as it recalls the Black Angels.

Meanwhile, “Telegraph,” throws so much echo on the drum beat, it’s impossible to tell how many drum tracks were used in the studio.

Inevitably, when your band can be defined in part by those who came before them, there comes a time when talent alone isn’t enough. Slower, repetitive numbers like “Lost Reprise” and “Kail Yuga,” succeed because beauty needs no other justification.

Even overwhelming blast from their sub-atomic reducer guitar pedals can’t hide the fact that songs like “Reich” and “Sweet Suicide” are uncomfortably close to the work of the Black Angels, however. Making the best Black Angels album since Directions to See a Ghost would be a plus for the Black Angels. For Sonic Jesus, it means they are a promising band who are capable of making a great album should they continue to focus on the things that make them unique. Few new bands arrive with such a solid grasp of the long history of psychedelic rock on their debut. Few are so willing to experiment. Even fewer succeed on a more subjective level, like that blackened vibe of theirs that is so fuckin’ killer. Save the name: Sonic Jesus.