Warning: "continue" targeting switch is equivalent to "break". Did you mean to use "continue 2"? in /nfs/c06/h01/mnt/88637/domains/blog.irockcleveland.com/html/wp-includes/pomo/plural-forms.php on line 210
 I Rock Cleveland I Rock Cleveland | The Rockometer: Sound & Color by Alabama Shakes 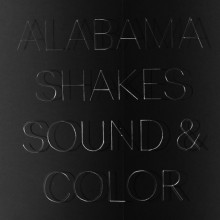 Is it still dad rock if the band is young and the lead singer, Brittany Howard is an African-American woman? I’m serious about this. For as much as I listen to Sound & Color, the second album by Alabama Shakes, I can’t shake the feeling that the classic Wilco burn is appropriate here.

Don’t get me wrong, Sound & Color is an exquisitely recorded album. If I were in a band, I’d want the team behind Sound & Color to record my album. The bass drum has a nice hollow thump to it. The snare is tight and flat. The guitars are clean and clear. Then, on closer listens, you can hear slight flourishes on the margins. It’s the perfect combination of vintage dust and modern sheen, like Booker T and the MGs, remixed, perfect for this group of old souls. And, Howard’s voice? Oh my, can the woman sing, fluttering up and down the scale, always with an extra oomph for when emotion hits.

But why the midtempo?

And why the lack of fun?

The only time I get the feeling that Alabama Shakes enjoyed themselves during the recording of Sound & Color is on the deliberately playful, rave-up, “The Greatest,” a track which was originally penned as another fucking ballad.

Alabama Shakes have the potential to be the next Wilco, or the next White Stripes, the next great American rock band, but not if they remain squirreled up in the studio in pursuit of the perfect sound forever. They need to cut loose a little, and live a little. Make it a double espresso instead of a single, and chase that with a Five Hour Energy. They’re too young to be playing this old man’s game like old men.