Warning: "continue" targeting switch is equivalent to "break". Did you mean to use "continue 2"? in /nfs/c06/h01/mnt/88637/domains/blog.irockcleveland.com/html/wp-includes/pomo/plural-forms.php on line 210
 I Rock Cleveland I Rock Cleveland | The Rockometer: Payola by Desaparecidos 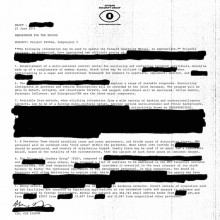 Political punk rock comes with a unique risk. What if all the causes you’ve been championing have been overtaken by more pressing issues by the time your album hits the streets? In our era, dominated by hot takes and social media firestorms, remaining topical is even more difficult. When you consider anarcho-punk forebearers, Crass were left to question their own strategy after Thatcher began and ended the Falkland’s War in the early ’80s while the band worked for more than a year on the double album, Christ – The Album, a modern band surely faces an even more daunting task, right?

Who cares about Occupation Wall Street any more? In the past month gay marriage is the law of the land and the Confederate flag has (finally) become a poisonous symbol. A diplomatic, nuclear arms treaty with Iran has been agreed upon and a Cuban flag is flying outside of an embassy in Washington DC. The United States of 2015 is a far different place than the United States of 2012, when Conor Oberst of Bright Eyes, and his long, dormant band, Desaparecidos reunited for a second round of incendiary arena-punk.

And yet, some of the tracks on Payola, released previously on 7″ singles during 2012 and 2013, remain as relevant today as they did two and three years ago. And we all have the notoriously ineffective govenrment of the USA to thank and our own stubborn individualism to thank.

Had our elected leasers in Congress been brave enough to tackle the difficult immigration issues our country faces, then, perhaps, “MariKKKopa” and the story of Arizona’s Sheriff Joe Arpaio, would fall flat. Instead, we have clown candidate Donald Trump using every stump speech as a chance to dehumanize and scapegoat Mexican immigrants and “MariKKKopa,” is still the ultimate argument against nativism (with bomb blast ryhthms, supersonic guitars, and an Oberst quivering in anger). Thanks, guys, for being the incompetent dipshits you are.

Similarly, songs that deal with income inequality, such as “The Left is Right,” “Golden Parachutes,” and “City on the Hill,” all benefit from government inaction since the peak of the Occupy Wall Street movement in 2011. “City on the Hlll,” it should be mentioned, also benefits from stealing one of conservative icon, Ronald Reagan’s favorite images (borrowed from Puritan lore), and a rabid and righteous taser-fire guitar staggered with a stomped out marching beat. Then, the chorus hits.

Hell, a mass shooting in Oberst’s hometown, at a Var Maur department store in the Omaha Westwood Mall happened in 2007, and despite the fact that it was followed by countless other mass shootings, America hasn’t done shit to strengthen its gun laws. The inaction is sickening. The synth riffs are sweet.

Do you see the pattern? Our national incompetence ensures tracks dealing with the surveilance state (“Anonymous” and “Search the Searchers”) and our underperforming health care system (“Ralphy’s Cut”) will be relevant for years to come.

A miss on modern policing and Baltimore and Fergurson and New York City and my hometown, Cleveland, isn’t a miss at all. Rather, it’s an opportunity. Kick the can is the new national pasttime, supplanting baseball. Never forget is now, “1-2-3-4, I declare twitter war” As fierce as Desaparecidos sound on these 14 tracks, and make no mistake there isn’t a modern political punk band in 2015 worth comparison, musically or lyrically, there’s little doubt in my mind that they have a #BlackLivesMatter anthem in them. When it comes out, we’ll still be protesting that shit.