Warning: "continue" targeting switch is equivalent to "break". Did you mean to use "continue 2"? in /nfs/c06/h01/mnt/88637/domains/blog.irockcleveland.com/html/wp-includes/pomo/plural-forms.php on line 210
 I Rock Cleveland I Rock Cleveland | New Jam City: New Jams by Savages, Pop. 1280, Metz, So Pitted and Spacin’ 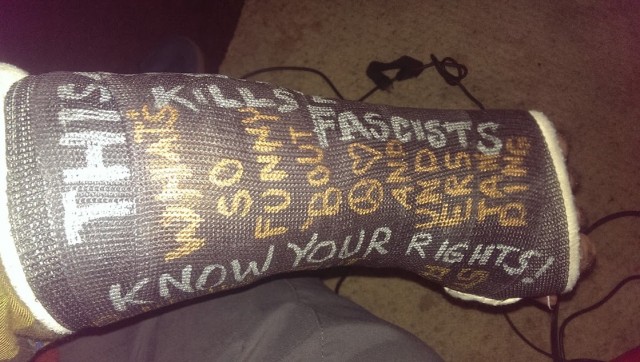 While it was never my intention to take such a long break at the end of the year, it happened. I had this broken arm from a gnarly cycling crash in November. Hey, at least I ended up sprawled across a driveway and not splattered on the street! Prior to the bike crash I had a painful arse condition. We won’t talk about the arse condition except to say it wasn’t the most common of painful arse conditions and it hurt like hell.

Now, after five weeks in a cast I can type sometimes and not feel pain. My arse doesn’t hurt every day. Things are looking up! Best of all, I’m slowly regaining my love of music. You see, when you feel pain every day every other sense is dulled. I listened to the new Sunn 0))) album but it might as well been the Starland Vocal Band. Get it? Now let’s get to the jams.

One of the first releases on my gotta rock list for 2016 is the sophomore album by UK rockers, Savages. If you don’t understand the appeal of these post-punks and their captivating frontwoman Jehnny Beth, their new video for Adore is as good of a place as any to start. You get the static and the rock and the drama in this ballad, and Beth at her full-throated best. Look for this one out 1.22 on Matador Records.

While I’ve long been a fan of synth punks Pop.1280 I’ll also be the first to admit they don’t go big nearly enough. I don’t mean big in the sense of Bono big and big fucking heart runway leading from the stage. I mean they don’t have enough in their discography that hits you on first listen. “Pyramids on Mars,” from the album Paradise coming out 1.22 on Sacred Bones, goes big and gives out super creeps. We need more of this, please.

Coincidentally, I’m wearing a Sub Pop “Loser” t-shirt as I write about Metz’s new single, “Eraser” (out 1.22 on Sub Pop). Not a coincidence is why I keep going back to Sub Pop. All these years after grunge took over the world they have still have room on their roster for throwback noisemakers like Metz, whose last album and latest single are living adverts for why Nirvana’s Bleach matters.

Similarly, one can place So Pitted, another Sub Pop band, on the Bleach family tree. “feed me,” may not be as Sub-Poppy as Metz – there’s industrial strength grind and robot-controlled synth rock mixed in with their take on obscure ’90s noise, but damn, will this one shake the senses to life. I feel like I’m living in a Ninja, but not with a kale green smoothie, but with the ingredients for a draino bomb. Look for So Pitted’s debut, neo, Feb. 19th on Sub Pop.

Lastly, I have this new one from Philly weirdo blues band, Spacin’, whom like their peers in bands like Birds of Maya, Purling Hiss, Kurt Vile (and the Violators), and The War on Drugs start with familiar classic rock tropes and keep on working their grooves until shit gets out there, way out there. Listen to “Over Uneasy” and you may hear the Stones, The Band, or even that damn Steve Miller Band. Then comes some squawk and a solo and fuck Steve Miller Band and the Rock and Roll Hall of Fame, you’re in the headiest blues trip 2016 has to offer. Spacin’s new album Total Freedom is out 1.15 on Richie Records. My copy was ordered roughly two minutes after I hit play.