Warning: "continue" targeting switch is equivalent to "break". Did you mean to use "continue 2"? in /nfs/c06/h01/mnt/88637/domains/blog.irockcleveland.com/html/wp-includes/pomo/plural-forms.php on line 210
 I Rock Cleveland I Rock Cleveland | The Rockometer: Total Freedom by Spacin’ 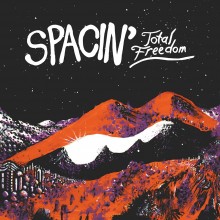 Led by Birds of Maya’s Jason Killinger, Spacin’ pulls in other folk from Philly’s weirdo music community centered around the Kensington neighborhood. Killinger’s wife, Eva, plays drums. Birds of Maya cohort, and Purling Hiss frontman, Mike Polizze guest shreds on a track. Jesse Trbovich, of Kurt Vile’s backing band, The Violators, pops up on a couple tracks. Paul Sukenna adds guitars, and his discography leads you to the War on Drugs’ breakthrough album, Lost in the Dream.

If any of those bands mean anything to you, you already know what to expect: classic rock, psychedelic rock and the blues twisted until those old styles sound new. Lead number, “Over Uneasy,” is a prime example of Kensington’s weirdo ways. The opening two minutes sound as if they came from the drive time traffic jam on your local classic rock station. Maybe it’s The Dead you hear, or the Allman Brothers, or even shitty party rock, like The Steve Miller band. It’s an easy groove, caked in lo-fi ooze until a brazen guitar squeal interrupts the chill. As the song progresses, all concept of form is lost in the mix. The groove is now a full on rumble of things with four and six strings. The rumble gives way to a murky movement which could have been pulled from one of Pink Floyd’s trips, which in turn bleeds into the second track, a screech fest called, “Kensington Real.”

Total Freedom isn’t all top top jams. If everything was a top jam, then nothing could be a top jam, for top jams are both absolute and relative. The uncomfortable instrumental, “Kensington Real,” plays its role by setting up the second half of side one, a pop-like suite including the undelible funk of “Human Condition,” a Reatarded, as in Jay Reatard-like, garage rock stomper called “Titchy,” and the wordly, psychedelic, “Stopping Man.”

If none of that sounds like jam in the top jam sense, be patient my man. Remember, Jason Killinger first came to prominence in Birds of Maya, they of the album-side monster jams, and it’s on side two where we hit those grooves. “US Ruse” sits at the midpoint between the Velvet Underground and it’s followers and the Stones on an epic ’70s night of drugs and booze during the Exile sessions where they simply let the machines roll, and at over ten minutes long, it’s one for the never ending jam fans.

Not to be outdone, album closer, and title track, “Total Freedom,” takes us back to where the album started: A classic groove and guitars climbing through the lo-fi mix to ecstatic heights.