Warning: "continue" targeting switch is equivalent to "break". Did you mean to use "continue 2"? in /nfs/c06/h01/mnt/88637/domains/blog.irockcleveland.com/html/wp-includes/pomo/plural-forms.php on line 210
 I Rock Cleveland I Rock Cleveland | Watch Me: “Mothers of the Sun” by Black Mountain 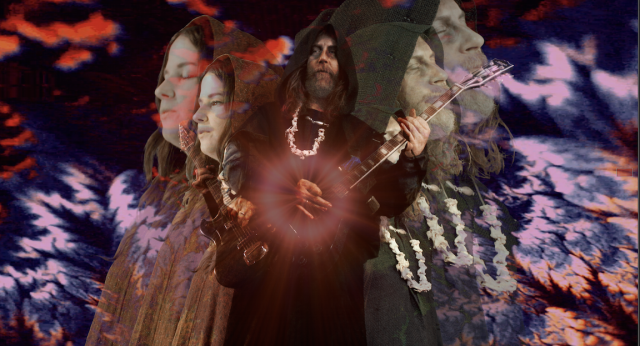 Sure, this video is all kinds of hammy, like every metal cliche on a whiteboard made it into the final cut of the video: Occult rituals. Two-headed guitar. Creepy people doing creepy things. Bleak landscape and horror film landscapes. Lava lamp visuals laid on top of the video footage. Lead guitarist/vocalist Stephen McBean in a Sunn 0))) robe. Shit, there may have been some demons and devils in there, too, and maybe a young lass lost in the woods, but I stopped watching. Still, I’m gonna give Black Mountain some slack because when I’m not watching “Mothers of the Sun,” I’m hearing the epic acid metal of their more epic than epic 2008 album, In the Future. Think all of the theatrics of Pink Floyd at their most spaced out, but with the chug and churn of the modern masters of doom metal. And that lead riff, man that’s a killer riff — low, heavy, keenly paced, rumbling with elemental force, an ideal foil to Amber Webber’s lighter, but no less foreboding vocal melodies. Mock the video all you want, but don’t mock the rock. Black Mountain are back and their new album, IV, will be out 4.1 on Jagjaguwar Records.