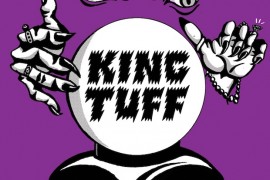 Would Batman still be Batman without Bruce Wayne? Would Superman be the same without Clark Kent? Sure, they'd still be super heroes, of course, they're super and heroic, but without their alter egos their characters would be far less compelling. For two albums, King Tuff's Kyle Thomas pulled off a similar stunt. By day he was a do-nothing layabout who surfed couches and snacked cheese doodles. In his dreams, and on stage, he was a different person. The minute he strapped on that guitar he would become King Tuff, the pin-up idol of teenage girls and the envy of every man who'd ever played to mostly empty, wholly disinterested barrooms.
Read More

King Tuff's "Hands" isn't a complicated jam, as big guitars, a bomping beat, and some well timed screams are just about all there is to it.  Yet, ...
Read More

Though often grouped with The Gossip, CSS and other dance rock bands, the 1990s new single, "The Box," goes back a little further than Franz ...
Read More

Celebrate Rocktober with One of The Greatest Riffs Ever: "Telegram Sam" by T. Rex

I can't quite explain it, but there's something about the opening riff in T Rex's "Telegram Sam." It doesn't blaze, shred, rip, or tear. It ...
Read More

“Riot in the Foodcourt” by Cobra Verde

Cobra Verde's "Riot in the Foodcourt" is a prime example of Cleveland style Rock 'N' Roll. It's a mish-mash of rock, glam, punk, and power pop ...
Read More

For a scruffy foursome out of Chicago, The M's sure keep some esteemed musical company. Barely a review goes by without the mention of such ...
Read More