Warning: "continue" targeting switch is equivalent to "break". Did you mean to use "continue 2"? in /nfs/c06/h01/mnt/88637/domains/blog.irockcleveland.com/html/wp-includes/pomo/plural-forms.php on line 210
 I Rock Cleveland I Rock Cleveland | I Rock Cleveland’s Guide to Cleveland Record Stores: Blue Arrow Records 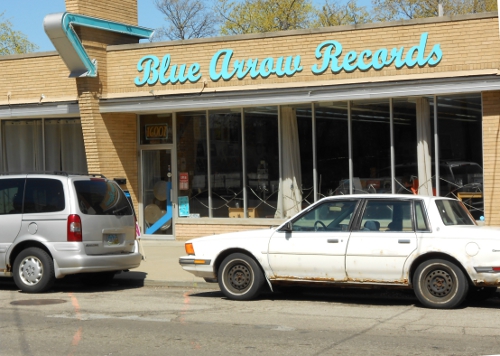 Staying on Waterloo Road in the North Collinwood neighborhood, our next visit is to Blue Arrow Records.  Since opening in 2009 this store has become the go to location in Cleveland for vintage vinyl.  Large, organized racks are stacked with rock, pop, soul, R&B, country and jazz from the ’50s through the ’90s.

If you just jumped into the vinyl resurgence with a new record player and want to have the entire Springsteen discography on vinyl, this is definitely your store.  For a reasonable price you can also stock up on such classic artists like David Bowie, CCR, The Rolling Stones and The Beatles.

Personally, Blue Arrow has been my source for vintage punk records.  On the right days you can get your fill of artists like Elvis Costello, Patti Smith, The Clash, Johnny Thunders, The New York Dolls and The Heartbreakers.  Lately, more newer records have started to flow through the store, too.

One thing you’re sure to notice when you first arrive at Blue Arrow, is the floor — It’s covered completely in lacquered album covers.  It may look slapdash, but peer closer and you’ll find themes in small sections of the floor.  For example, there’s a cat corner. 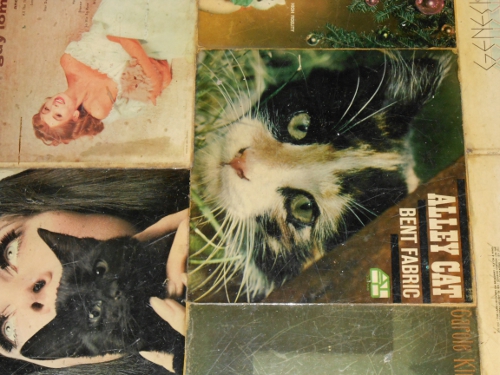 After taking in the visuals, and scanning the records displayed on the shop’s walls (They are for sale and often times, many of the more in demand pieces of vinyl will be hanging around the store’s perimeter and behind the counter) you’re next order of business should be to head on over to the new arrivals section.  It’s split in two — One half rock and pop and the other half is soul and R&B.  And then, it’s on to the serious digging.  This is one store where you can spend hours if you’re not careful.  For in addition to the large volume of LPs, Blue Arrow also offers one of the area’s better 45 sections. 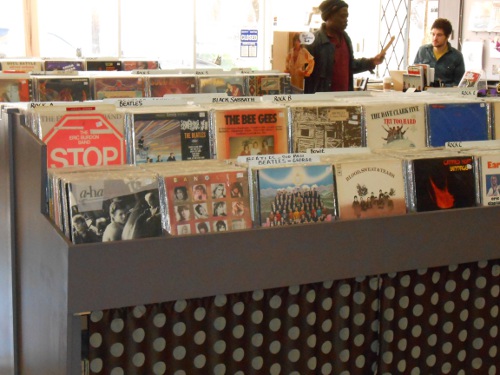 Like their neighbors, Music Saves, owners Pete and Debbie Gulyas are also active in the larger music community and Cleveland as a whole.  In the past, they’ve hosted bands, DJs, and readings in the store.  A small stage in the store can be cleared for performances.

Additionally,  Debbie Gulyas took it upon herself to start a charity to care for the neighborhood’s stray cats.  The Waterloo Alley Cat Project spays or neuters, and feeds the areas feline population. Some of those cats she’s helped have become permanent residents of the store.  I must warn you, however, one tabby in particular, has become very friendly and if you start petting, you’ll have a companion that will follow you from rack to rack, interrupting the serious task at hand with requests for pets.