Warning: "continue" targeting switch is equivalent to "break". Did you mean to use "continue 2"? in /nfs/c06/h01/mnt/88637/domains/blog.irockcleveland.com/html/wp-includes/pomo/plural-forms.php on line 210
 I Rock Cleveland I Rock Cleveland | The Rockometer: You’re Nothing by Iceage

The Rockometer: You’re Nothing by Iceage

On my way to writing a review ripe with praise for the young, Danish punk band, Iceage, and their second album, You’re Nothing, I came across Everett True’s alternative review on Collapse Board.

True’s been doing the criticism gig since the early ’80s. He’s documented UK punk, grunge, and riot girl rock and has barely rested his pen since. So when True, now often taking the role of hard to impress, take no shit uncle to younger critics, raises concerns about Iceage’s authenticity, I read and I consider.

The crux of his argument against Iceage consists almost entirely of personal recollections during that point in time where UK punk began its nasty turn to the right and became a symbol of white nationalism. In particular, he recalls a time when he unexpectedly found himself at a Skrewdriver show (they were unannounced) and he feared he wouldn’t make it out of the club with a full supply of blood.

What does any of this have to do with Iceage, you ask?

First, there’s the imagery, borrowed from the early ’80s. This is Iceage’s official symbol, printed on a flag. 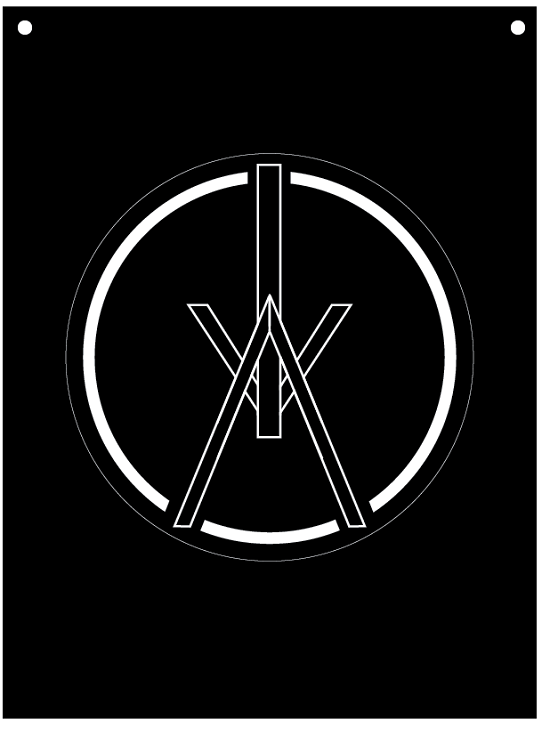 And then, there’s the accent of English “Oi.”

In my notebook, I had scribbled something like, “Listening to mumbled growl of Iceage’s Elias Rønnenfelt, I picture a large Englishman from southeast London, always three pints ahead of his mates, one ready to knife a man for the crime of supporting the wrong side at the wrong time and place.”

True hears Iceage, and their punk pose borrowed from more violent times, and it makes him think racist punks. I hear racist football fans from Millwall. We’re on two sides of the same, nasty coin.

Scott Creney, again for Collapse Board, went even further, openly questioning whether Iceage are nazi-punks or kids simply using nazi-punk imagery because it makes them look tough. He linked back back to the Vice story which first unearthed Rønnenfelt’s art work published in the band’s zine, Dogmeat, and went on to list too many connections to white power for anyone to ignore. 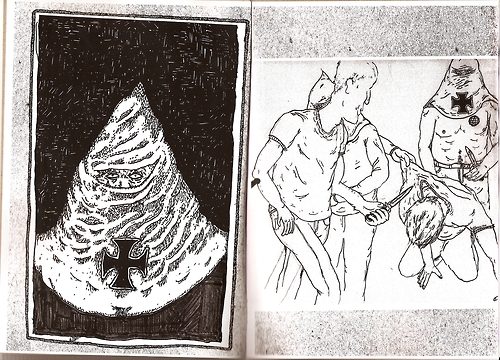 This isn’t the guilt by association game played by the American, political press. When you wear buttons of neo-Nazi musicians, and sport tattoos of racist bands and openly praise works by other racists and neo-Nazis, you are making the connections for everyone.

To be fair, in Iceage’s public statements they come off as four lads from an active, Copenhagen punk scene who were too good not to be noticed (2011 interview with The Quietus; 2011 interview with the Guardian). During their formative years, they became fans of anarchist punks, Crass, a band who were notable for their stances against racism, fascism and capitalism. But, they are just as quick to point out that their music does not follow any political ideology. They sing about young adult angst and every day things. In the Quietus interview, the band, when pressed about meaning, became rather bland:

Every song is about something. Our lives, what surrounds us, feelings, states we’ve been in, thoughts.

Subjects include lucidity, sex, brotherhood, time, visions. But it’s not our job to explain the songs, and it’s kind of hard to give you an answer as the songs concern various subjects.

When questioned about his Nazi dalliances by Vice, Rønnenfelt had all the right answers. And by right answers, I mean the elusive kind.

“I don’t like most parts of the music media,” Elias told me. “It’s lazy, empty and sensationalist. If they expect something of us that we’re not, it’s not our problem.

“When the first accusations of Nazi sympathies came, we didn’t take them very seriously,” Elias continued. “The argument was very vague. Now one of the biggest Danish newspapers has been running several stories about it. I don’t know whether to feel insulted or whether it’s just too absurd… Point is, we haven’t actually used any Nazi imagery, ever.” I asked Elias what was going on in Dogmeat: the iron crosses, the hooded figures, the switchblades pointing to the necks of Muslims. “That’s a collage drawing of different things I was seeing in the news, not a pro-race-riot drawing.”

Danish cartoonist, Kurt Westgaard was documenting things he saw in the news, too, when he published his famous Muhammad cartoon, featuring the prophet with a bomb in his turban.

Oh, and they also happen to sell Iceage engraved knives on tour.  The no stabbing sign at the merch table made the knives ok. 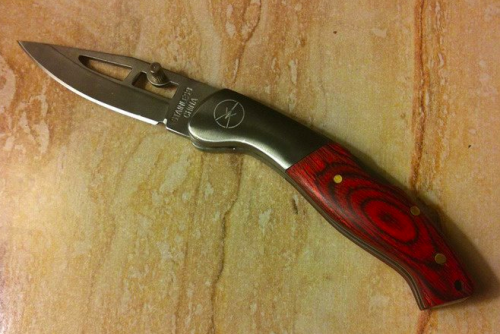 Iceage may be a complicated, albeit, naive bunch on paper, and they may even be racists, but once you strip away the context from their latest effort, You’re Nothing, it becomes a 30-minute bludgeon of an album. The snare and cymbals are so tight they sound like hits on aluminum pipes. While the guitars arrive in waves, buzzing like the term buzz band meant more than an artist receiving hype in 2013. When paired Rønnenfelt’s unstable yowl, the threat of violence becomes even more acute. It’s time to widen that stance and sharpen those elbows, kids. Shit’s about to get real.

Save for the two-minute instrumental “Interlude,” a song ripe with war imagery like the sound of helicopter blades whirring and the drum beat of battalions falling into line, Iceage keeps it as real as possible. Songs like the standouts “Ecstasy,”,”Coalition,” “In Haze,” and “Awake,” are all intense, relentless and surprisingly melodic efforts.

If only Everett True hadn’t gotten me to dig deeper, I wouldn’t have to end this review with the line, “Do Iceage really understand the game they’re playing?” If you’re dumb enough to sell a knife at a punk show, even as a joke; if you’re dumb enough to dabble in casual racism simply for shock value and expect others not to take umbrage, the answer becomes a strong and resounding, “No.”

Until the members of Iceage speak up and clarify a few things, ok, a lot of things, I can’t recommend buying this album. Please, go read Creney’s piece. Then, ask yourself, if this video of “New Brigade” from Iceage’s first album, where band members dress as Klansmen, was done for the sake of provocation, or if there something more evil at work? For a band who aren’t racist, and write about, you know, everyday things, the weight of evidence indicating otherwise is becoming a burden.

Lyrics reprinted to prove a point.