Warning: "continue" targeting switch is equivalent to "break". Did you mean to use "continue 2"? in /nfs/c06/h01/mnt/88637/domains/blog.irockcleveland.com/html/wp-includes/pomo/plural-forms.php on line 210
 I Rock Cleveland I Rock Cleveland | The Rockometer: Tied to a Star by J Mascis

The Rockometer: Tied to a Star by J Mascis 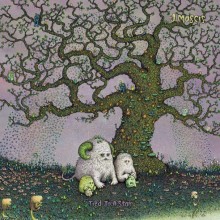 On my personal Mt. Rushmore of guitarists, four men are carved into stone — Neil Young, Thurston Moore, Kurt Cobain, and Dinosaur, Jr.’s J. Mascis. To say I’m a fan of Mascis’ work over the years would be an understatement. I’ve got all the Dinosaur Jr. full lengths, some originals, some reissues. There’s the 7″ of “Feel the Pain.” A 7″ box set released for this past Record Store Day collecting Dinosaur, Jr.’s early singles. Earlier this year, I added the 2XLP live set of J. Mascis jamming with Earthless. That record needs no further description. All of this is a really long way of saying, I’m duty bound to buy J. Mascis solo albums.

Look, I’m under no impression that acoustic J. Mascis on his latest solo outing, Tied to a Star, will deliver the same type of thrills as plugged in J. Mascis posing in front of a six-stack of Marshall amps, leveling a room with feedback and fury. I have much more realistic expectations. All I want is a moment or two of fine finger-picking and a couple tracks to reassure myself I indeed need J. Mascis unplugged in my life.

Even without the noise, he can mesmerize. Have you heard his cover of Edie Brickell’s “Circle?” This is the stuff of Eliott Smith suicide watches.

And from, Tied to a Star, there is “Wide Awake.” It has finger picking and Chan Marshall of Cat Power on backing vocals.

Really, that’s about as good as it gets here. I can rationalize and I can pretend Tied to a Star will be more than a space-eater in my record cabinet, but I’d only be fooling myself and you. And while pleasant, discreet, and sincere are all welcome adjectives here, the one description that sticks the most would be background music. So, J. Mascis, hero and inspiration to rockers, wants to avoid the spotlight for a while. That’s cool. I have dishes to do and I can’t have loud noises distracting me. I may break a $4 Target plate.