Warning: "continue" targeting switch is equivalent to "break". Did you mean to use "continue 2"? in /nfs/c06/h01/mnt/88637/domains/blog.irockcleveland.com/html/wp-includes/pomo/plural-forms.php on line 210
 I Rock Cleveland I Rock Cleveland | The Rockometer: Illegals in Heaven by Blank Realm 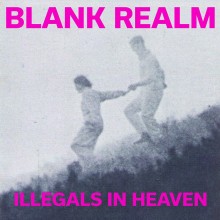 In one sense, yes, Illegals in Heaven is Blank Realm’s pop record, for gradually over the course of their career, the Brisbane art-punks have moved from outsider noise rock aiming to please the curators of all things obscure to easily identifiable song structures with shorter run times and predictable melodies. Yet, while continually making strides towards accessibility, the band still enjoy playfully fucking with everything they record by placing track upon track of melody, counter melody and white noise upon those simple songs.

In the wrong band’s hands, ahem, Animal Collective, this would be a recipe for pop claustrophobia. As the musicians overwhelm the listener with invention, the songs become more and more difficult to parse, communicating neither mastery nor glee, but migraines, shitty, debilitating migraines.

Smartly, every piece of every song was recorded to compliment each other, which is quite a feat should you try to isolate individual sounds from their peers. When there’s a guitar solo, it’s not the strike a pose for the crowd type of solo, but a succinct blast. Similarly, when Blank Realm get nerdy with the electronics they don’t bother with drops or freak-outs, or whatever gonzo things kids do with their gear today, when a simple, repetitive loop will do.

And, even break-up ballads.

All are tastefully engaging.

What Blank Realm don’t do on Illegals on Heaven is hit you with the obvious. They have neither the personalities nor the sound to draw attention to themselves. They count on you, the listener to pay attention to the music as it plays, as you’re listening to music and not walking/running/ignoring your kid throwing a fit for buying the wrong chicken nuggets at the supermarket/making pretty spreadsheets, dumb enough for executives to understand. To listen to music and be taken away from life is a novel concept in an age where music is more often seen as a complimentary activity and not a primary activity, I know. But should you listen, really listen to Blank Realm, you’ll begin to understand why they’ve been an underground phenomena to those lucky few in the know who knew they had this kind of album, a discreet, yet bold, patient, yet driving, familiar, yet forward facing pop album in them.